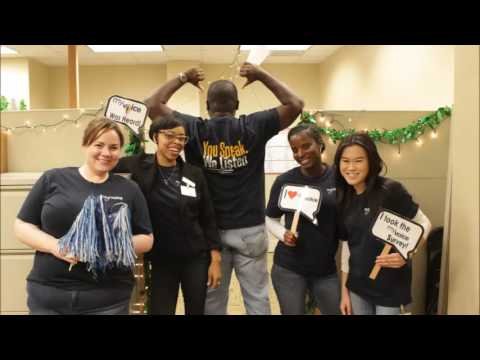 My parents parked at the Casino and were headed through the Marriot to Baton Rouge when my father, 74, missed a step and ended up banging his head on the floor. There was a couple behind them who quickly called 911 when my mother (81) was trying to help him, and two ladies from NL, one of whom was a nurse, that rushed over to help as he laid there, bleeding from his head wound. The staff at the hotel brought him pillows while they waited for an ambulance and even called the casino to make sure their car didn't get towed if it was there overnight.
He spent the night in the hospital, but should be home tonight. I am so thankful that we live in a city where some people still care and will help strangers in need. My mom would have been lost without them.
Whoever you are, thank you. Thanks to every single one of you. We were lucky that you were there.
We'll make sure Dad takes the elevator next time!

Meant to post this last week but I've been to the casino (L'auberge in Baton Rouge) 4 times since it reopened on the 15th. Place has been absolutely fucking packed every time. Actually feel pretty good about the safety measures implemented. They check your temperature at floor entrance and offer you a mask if you want one. Every other machine is turned off and plexiglass surrounds all the table games. Not sure how many people are walking around disinfecting shit but it legit seemed like every time I got up some immigrant worker was immediately spraying down where I was. Alcohol is still being served. I have an elite players card so my comps have always been pretty good but when Covid hit I lost a solid 2 months of around $1,500 in a week in comps and rooms. Penn recently extended all my comps that were missed during those 2 months all the way through the end of July regardless of play. I've already hit 3 jackpots during my 4 trips and the cashiers I'm close to told me they're paying out a huge amount of jackpots for 25% capacity numbers. L'auberge is reopening its hotel on May 29th.
Take all this for what it is. I'm a degenerate gambler but don't sleep on the casinos.

Jesus. I feel stupid writing this. This is not something I feel comfortable sharing with anyone in my circle (family friends, co-workers), so I’ll share it with you, nosleep. I’m new to the group, and not sure exactly how this whole thing works, but I could use some advice, or at least some feedback.
​
First, a quick hello: I’m a forty-eight year old traveling salesman. I provide electrical components to military/defense aerospace companies. My territory encompasses several states which requires lots of travel. Basically, I spend more time on the road than I do at home.
​
I know. Poor guy, right? I get to see where they make the missiles and tanks, AND I get to travel every week. But please don’t misunderstand, I know I’m lucky to have a great job. I’ve been doing this for almost eight years and couldn’t imagine a better way to make a living.
​
My concern is not with my job, it’s where I stay at night. I started out booking hotels (mostly Marriott and IHG properties), but after years of eating those scrumptious ‘scrambled eggs’ and turkey patties from the free breakfast, well, I decided to try something different. So a few weeks ago I booked a Bed and Breakfast.
​
My first experience was in Arkansas. I don’t want to post the name of the B&B, but it is in the Ozarks near Eureka Springs. It is an older home, remodeled with new carpet. I remember the staff being extremely nice and helpful. I stayed two nights while visiting customers. Nothing out of the ordinary happened other than I accidentally left a pair of my work slacks hanging in the closet.
​
The following week, I was in Salt Lake City, UT. I stayed in a two-story house with a view of the Wasatch mountains (beautiful). The first night, I was restless. Even my white noise app didn’t help. The second night, I was awakened around 3am. Dripping sweat, and my heart was messing up a little. I have a slight AFib (Atrial fibrillation) condition that bothers me if I don’t eat enough carbs. Couldn’t go back to sleep, so I watched a YouTube documentary about an island in Mexico full of broken dolls.
​
Next morning, I packed and had breakfast in the common area before heading to the airport. On the way to the rental car facility, I couldn’t shake the feeling I’d left something at the B&B (not my slacks again either- Ha!). I even called to have them check my room. The feeling never really left.
​
Next week was a detached B&B in Albuquerque, NM. It was a converted garage next to the main house. Nice enough but smelled a little moldy. I awoke the first night to the barking of a dog. Again, I was drenched in sweat and my AFib was kicking the hell out of my chest. I tried cooling down with a wet washcloth, but I just couldn’t get comfortable. I tossed and turned all night, and the next morning, the feeling that I’d lost something was back. I checked out without breakfast. Called my wife from the airport- Asked her if everything was ok at home. She sounded worried about me.
​
Last week I was outside Tulsa, OK. Stayed in a little cottage near a casino. The lights seemed dim in my room. And the tv didn’t work. I know this will sound ridiculous, but as soon as a set my bag down, the feeling was back. Obviously, I couldn’t have left anything yet. But I couldn’t shake it. I went to bed and couldn’t sleep, so logged on to YouTube. My Recommended Feed offered a video about a bible in Dalton, GA that leaks holy oil. From that video, I just watched whatever popped up next (When will the World End, The Truth about Imaginary Friends, How to Astral Travel, etc.) Five or six videos later, one came up on Lost Souls and What Causes a Soul to be Lost. It’s a short video of some old lady rambling about souls that can’t find the ‘light’ or something. But after watching it, I started to wonder if this reoccurring feeling could be tied to more than just leaving my slacks in Arkansas.
​
Tonight, I’m in Baton Rouge, LA. I think it was a bad idea to stay in a B&B. I’m a little freaked out. Should have booked the Marriott. I’m near the swamp and can hear the frogs and god knows what else outside my window. I met with a customer this morning who asked me if I believed in demon possession. The question caught me off guard. She realized I was uncomfortable and tried to downplay the question by telling me she had an aunt living in Shreveport who could tell someone’s mood by reading their aura. I said it sounded like a cool trick and changed the subject back to electrical components. She kept glancing above my head.
​
I’ve just felt weird all day. When I got back to my room tonight, I ordered some of that holy oil from the leaking bible. Not sure why. Not even sure what to do with it once it comes. I don’t want to sound cliché, but I don’t feel like myself. I don’t know if it is possible to ‘lose’ your soul like the YouTube lady said. I wouldn’t think you could just accidentally leave it in a B&B. But I do wonder if you can pick things up from rooms that others have stayed in. Like maybe it’s possible that someone left ‘bad energy’ in a room? Maybe it attached to me or my stuff.
​
This may not be the right venue to write this kind of experience, but I’m just not sure who to talk to. Feel free to comment. I’ll follow this post when the holy oil comes.

I smoked crack while I survived Hurricane Katrina.

Trip to Baton Rouge, LA - Any tips for running locations/safety?

So, tomorrow I am supposed to drive out to Baton Rouge and spend the next 4 days at a conference. I'm looking for some locations to run so I don't have to suffer as much on the hotel treadmill but I hear a lot of different things. Anybody have any tips/ideas or insight on the area surrounding the Convention Center, Belle Casino, or the Hilton Capitol?
Thanks in advance!

[Table] I am a singer and pianist at a very famous piano bar on Bourbon Street in New Orleans. AMA